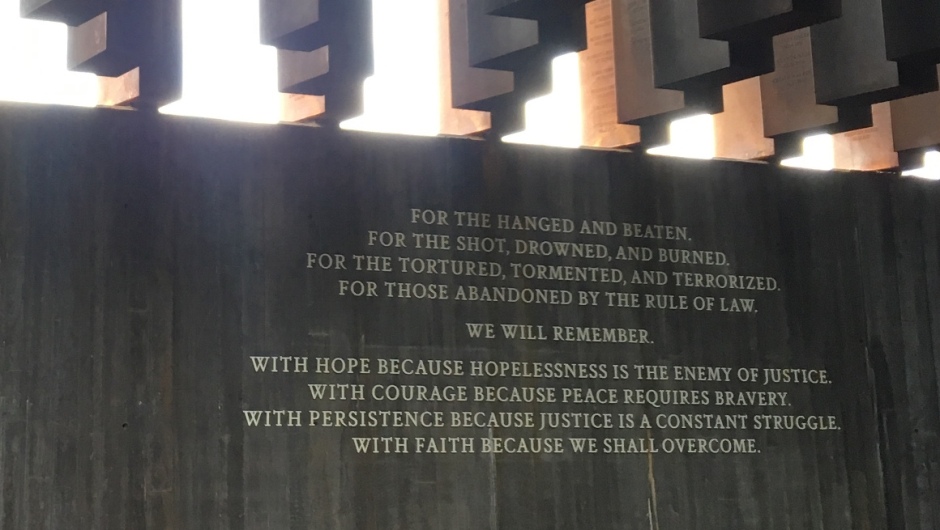 Last week I wrote a brief summary of my initial reactions to the pilgrimage I took with other local clergy to Montgomery, Tuskegee, and Birmingham, Alabama. You can read that essay here. Today, I would like to dwell on the centerpiece of the pilgrimage, the year-old National Memorial for Peace and Justice (sometimes called the Lynching Memorial).

First a little context from the companion book I purchased at the Equal Justice Initiative (EJI) bookstore:

The National Memorial is dedicated to educating visitors about how two centuries of enslavement of black people evolved into decades of terror and violence following the collapse of Reconstruction. It details the violence and terror that forced millions of African Americans to flee the South and the continuing legacy of that terror through the 20th century until today.

Using investigative research, sculpture, art, design, literature, and poetry, the National Memorial is a space for everyone to confront our nation’s history of racial inequality with hope that a future of peace and justice can be achieved. The National Memorial is a beginning – an opportunity for communities across the country to claim their monuments, to confront the past with courage, and to begin a hopeful future in which truth leads to repair, restoration, and reconciliation.

We arrived at the memorial site in the early afternoon and listened to a presentation given by one of EJI’s young attorneys as she spoke with a large group of attentive middle schoolers. She told them about EJI’s work concerning death penalty cases in Alabama and its national work for children sentenced to die in prison. She talked with a combination of conviction and down-to-earth lawyerly acumen, the latter of which spoke volumes about the uphill battle EJI faces in their work.

After the presentation we gathered to head into the memorial site, first passing through metal detectors (as we did going into most of the museums and monuments we visited during the week). The day was Alabama hot – pushing 90 on the First of May, though the humidity was not as bad as it could have been. The sky was clear blue, which made the first element of the memorial stand out even more in its gruesome and beautiful immediacy.

The brutal sculpture of a slave auction confronted me with the historical reality of the roots of racial terror lynching. After the federal government outlawed the international slave trade in 1808, the Domestic Slave Trade grew in earnest. The companion book notes this context:

In the 19th century, a thriving plantation economy in the United States and the forcible taking of land from Native people increased the demand for enslaved labor as calls to end the international slave trade gained traction. As a result, the Domestic Slave Trade escalated. More than a million enslaved people in the North were trafficked to the South, where the population of enslaved people grew dramatically.

Black people suffered brutal abuse and mistreatment throughout this region. Nearly half of all enslaved people were separated from their children, spouses, parents, or siblings during the Domestic Slave Trade.

The sculpture evokes the pain of this separation as the woman holding her baby flings her hand out but cannot reach the man standing tall and resolute. The other four figures struggle against their chains, completing the circle of misery. To arrive at the memorial proper, I had to confront this sculpture; it is impossible simply to walk by.

Beyond the sculpture the path to the memorial ascends gently alongside a wall, which houses information about the context of the memorial, similar to that which I have shared from the companion book. The path turns left and continues to climb; signs direct visitors not to walk on the grass, making it clear this ascent is part of the design of the memorial.

Once inside the memorial there was a profound silence – not a complete lack of noise, but the presence of a wordless holiness that held in its embrace sorrow, pain, and hope.

The memorial is made up of a collection of hollow slabs of metal, each one carved with the name of a county were one or more lynchings took place. Below the name of the county is a list of names of victims and the dates they were murdered. Some say “Unknown” because the name of the victim is lost to time or there is uncertainty about the name.

I kept having to tell myself to look not only at the names of the counties, but at the names of the victims. My eyes kept drifting up to the less personal part of the monuments, and I had to force them down to read the names of people who were killed in order to uphold an unjust society based on the sin of white supremacy.

Each of the hundreds of monuments stand at the exact same height, but the level of the floor shifts downward as you walk. The first collection of monuments stand on the floor. This makes the visitor choose one of two paths: either walk along the outside of the monuments in a straight line or weave your way through them. The latter has the effect of making you stagger back and forth in a zigzag pattern, unsure where to go. I chose a combination of the two: I realized that I had unconsciously chosen the easier path – along the outside. I was unintentionally keeping myself from engaging, from confronting the memorial on its terms. So I moved among the monuments, trying to bear witness to as many names as I could.

After the weaving section, the memorial turns and the floor begins to descend. Again, the monuments remain at the same height, so I had to change my posture to stay engaged. By the next turn, the floor reached its lowest level. Now all the monuments were well above my head. I had to crane my neck to keep them in view, surely an intention of the designer to place my body in the same position as someone who attended a lynching. Indeed, the horrible reality is this: many lynching were advertised in local newspapers and a festive atmosphere accompanied them, with thousands of people in attendance.

I had to ask myself: were I alive in 1933 and living where I grew up in Tuscaloosa, would I have attended the lynching of Dennis Cross on September 24th?

As I gazed up in mournful horror at the rows and rows of monuments, the need struck me to find the monument for Tuscaloosa County, where I lived from 6th grade through high school (it’s still the longest I’ve lived in one house in my entire life). I spent quite a while looking and finally found it in the outer ring, above the waterfall wall. Ten lynchings happened in Tuscaloosa County – that’s not something I learned in 9th grade Alabama history class.

After a long time of craning my neck skyward, I needed a break and found it on the wide steps facing the wall that says this:

For the hanged and beaten.
For the shot, drowned, and burned.
For the tortured, tormented, and terrorized.
For those abandoned by the rule of law.

With hope because hopelessness is the enemy of justice.
With courage because peace requires bravery.
With persistence because justice is a constant struggle.
With faith because we shall overcome.

I read and reread the last four lines until I had them by heart. These words are a call to mission, a prayer to God to receive the gifts of hope, courage, persistence, and faith, which God constantly bestows on us, each gift a facet of God’s great love for all creation. In the midst of this memorial which documents the depths of humanity’s suffering at the hands of humanity, these words speak to the future, to the just society we can all take part in creating together.

I returned to my walk through the memorial and exited the main section into the bright light of day just as rain began to fall. Sun showers are common on Southern summer afternoons, but this one felt different. The rain was a reminder to me that I have been washed in the waters of Baptism. And my baptism is a threefold call on my heart: (1) to claim the Belovedness God installed at the depths of my identity and honor that Belovedness in the depths of each person I meet; (2) to assert that sin has no ultimate power over me, which means through God’s grace I have the ability to break free of the grip of sinful systems and join their solutions; and (3) to follow the Oppressed One, Jesus Christ, along whatever path he is laying before my feet, especially those paths that lead me to work for peace and justice.

As I walked in the rain, I couldn’t help but hum to myself “Were You There When They Crucified My Lord.” The second verse asks:

Make no mistake, Jesus of Nazareth was lynched. And this spiritual song links his brutal experience on the cross to that of over 4,000 victims of racial terror lynching in the period between 1877 and 1950. Nowhere was that connection made more powerfully for me than in walking through the National Memorial for Peace and Justice.

After having journeyed through the memorial and borne witness to the narrative of horror and hope it shares, God has blessed me with the weight of new knowledge and the will to work towards a more just society. If you are feeling God’s call to this work for the first time, please join me. If you have been engaged in this work for a day, a year, or a lifetime, might I join you?

3 thoughts on “Sabbatical Notes, Week 3: The National Memorial for Peace and Justice”