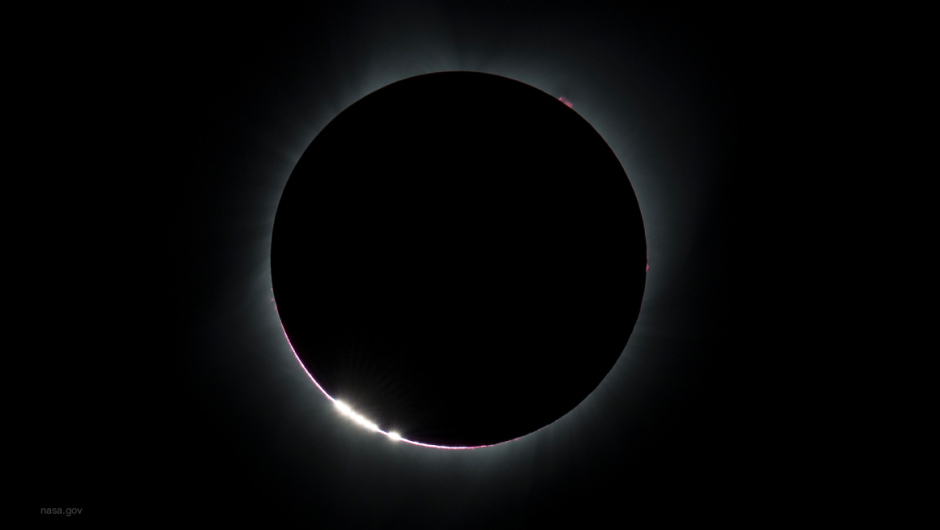 Unfortunately, New England did not fall along the “path of totality” during the eclipse last Monday. I had friends in South Carolina, Tennessee, and Kansas who posted their excitement and wonder on Facebook, along with some grainy cell phone shots of the moon getting in the sun’s way. In 2024, we’ll be much closer to the “path of totality” during the next eclipse, which will cut a swath from Texas to northern Maine, and we’ll get a better taste of what our lucky friends got to experience last week.

The eclipse may have come and gone, but the phrase “path of totality” has really stuck in my mind. It’s a fabulous, weighty term, and does an equally good job of explaining the kind of life God invites us to live as followers of Jesus Christ. We strive to follow the path of totality, a life given over fully to God. Of course, most of us don’t exist along this path of totality too often: most of the time, we live in Connecticut, which only received about a two-thirds eclipse on Monday.

In today’s second reading, the Apostle Paul helps us move closer to the path of totality with these stirring words. He says, “I appeal to you… brothers and sisters, by the mercies of God, to present your bodies as a living sacrifice, holy and acceptable to God, which is your spiritual worship. Do not be conformed to this world, but be transformed by the renewing of your minds, so that you may discern what is the will of God—what is good and acceptable and perfect.”

Present your bodies as a living sacrifice. Such an act of devotion places us on the path of totality, and yet it’s an oxymoron, right?

In the tradition, in which Paul and the rest the New Testament writers were raised, sacrifice was an indispensable part of the worship of God. And an indispensable part of sacrifice was killing the animal being offered. Sacrifice was one way Israel affirmed and strengthened its relationship with God. Paul grabs onto this effect of sacrifice—this affirmation and strengthening—but dispenses with killing animals for good reason. Earlier in his Letter to the Romans, he says: “We have been buried with [Christ] by baptism into death, so that, just as Christ was raised from the dead by the glory of the Father, so we too might walk in newness of life” (6:4). We have already passed through death, says Paul; therefore, if we are going to be a sacrifice, we must be a living one.

Being a living sacrifice means using our bodies for action. We are built to move and run and hold and high-five and embrace. You don’t need to be in tip-top physical condition to be a living sacrifice. All we need is a desire to serve. When we present our bodies as a living sacrifice to God we offer back to God all the good gifts God has bestowed upon us. We ask God how we can use these gifts to serve in our community and in the world. We listen for that still, small voice calling us to a mission, a mission which matches our deep gladness with the world’s deep hunger.**  And then we act, asking God to make our bodies into vessels of God’s light bound for a darkened world, a world mired in perpetual eclipse – eclipse of love, of care, of justice, of peace.

This darkened world asks us for our conformity to its misplaced values. But conformity to such values leads to the deformity of our actions as God’s living sacrifice. Paul says, “Do not be conformed to this world, but be transformed by the renewing of your minds.” We make mistakes. We sin. We put lesser things in God’s place. We veer from the path of totality. But Paul knows this doesn’t have to be the whole story: be transformed, he says. Allow change and growth. We are a living sacrifice, and living things continue to renew, to grow new skin, to flower again next year. Our transformation takes place in the renewing of our minds, in the reorienting of our priorities so they resonate with the mission of God.

Now, that old nagging, itchy feeling crops up. “I’m just one person and this all seems so big—what can I do?” That’s the myth of rugged individualism talking. Yes, it’s true we are individuals, but there is a vast chasm of difference between being an individual and being just one person. None of us is just one person. None of us is alone. C.S. Lewis says, “[Human beings] look separate because you see them walking about separately…If you could see humanity spread out in time, as God sees it, it would not look like a lot of separate things dotted about. It would look like one single growing thing—rather like a very complicated tree. Every individual would appear connected with every other.”***

Rather like a very complicated tree. That’s the key. Throughout this sermon, I’ve quoted Paul saying that we “present our bodies as a living sacrifice,” not living sacrifices. Paul is not botching his grammar here. Paul intentionally says that we are a singular living sacrifice, meaning we present our bodies collectively to God. Paul continues: “For as in one body we have many members, and not all the members have the same function, so we, who are many, are one body in Christ, and individually we are members one of another” (12:4-5). The path of totality was never meant to be walked alone. In the one body of Christ, our individual identities and personalities and gifts find their most perfect expressions. The living sacrifice happens when we affirm and strengthen our relationship with God by sharing our gifts with one another. When the collective body galvanizes into action to serve the mission of God in the world, transformation and renewal have already begun.

So, “Present your bodies as a living sacrifice, holy and acceptable to God.” Whether you have 4% body fat or a couple of replacement hips, remember that each of our bodies is built for action, for service, for love. Each of our bodies is designed to fit into the one body of Christ. And this body is alive. This body of Christ knits us together as a living sacrifice, offered up to God to bring transformation to the world. During an eclipse, the path of totality is dark for a few strange minutes. But in the path of totality that follows Jesus’s footsteps, there is only light. This light shines in the darkness, growing new life, reconciling broken relationships, healing divisions, bringing justice, waging peace. That’s the path I want to walk and partner with Jesus as he widens it to encompass the totality of creation.

*Remember the anti-Semitic sign I spoke about two weeks ago, which quoted the Bible to justify its hate.