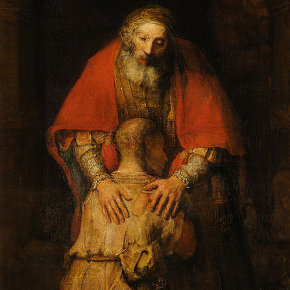 We live in a broken world: broken homes, broken promises, broken government, broken ecosystems. We’re used to brokenness. We learn to live with it. We hear about another mass shooting or another intractable political standoff or another couple dissolving their marriage, and we might shake our heads for a minute and sigh and say, “Boy, I don’t know.” And then we go back to whatever we were doing. And yet, even in the midst of this listless response to brokenness, something niggles and naggles at us, unsettles us; something deep within reminds us that “broken” is not the way things are supposed to be. We believe that God created everything and called Creation “good” and never made a thing called “brokenness.” And yet, brokenness crept into Creation. Separation and division soon followed. Today, we see a broken world, and we know that it could be, that it should be – better.

And in that seeing, in that knowing, God invites us to participate in God’s mission to repair this brokenness. In today’s lesson from his Second Letter to the Corinthians, Paul tells us that God “has given us the ministry of reconciliation.” He continues, “In Christ, God was reconciling the world to himself, not counting their trespasses against them, and entrusting the message of reconciliation to us. So we are ambassadors for Christ, since God is making his appeal through us.”

Did you hear that? We are ambassadors for Christ – representatives of Jesus bringing his message of reconciliation to this broken world. Reconciliation is the healing of brokenness. When Jesus welcomes and eats with “tax collectors and sinners” in this morning’s Gospel, he models the ministry of reconciliation. The scribes and Pharisees like their society just fine the way it is. They’ve learned to live with the brokenness, profit from it even. And so they grumble when Jesus upsets the status quo and shows them what wholeness can look like. Jesus tells them a story about a family, a family marred by brokenness, a family in need of reconciliation.

The younger of two sons basically says to his father, “I wish you were dead so I could have my inheritance.” His father acquiesces, and the younger son takes his portion and travels to a distant country where he squanders his fortune in what the King James Version calls “riotous living.” At first glance, the younger son’s sin sure seems to be his debauchery, given his status as a decadent wastrel. But I don’t think his prodigality takes the top seed.

Instead, his major sin is the rift caused by his separation from his family. Jesus makes a point to say that the father divides his household to fulfill his son’s wish. And then the son doesn’t settle nearby, but in a “distant” country. With the division and separation complete, all that’s needed is a famine for the younger son to notice his folly. When he comes to himself sitting in the filth among the pigs, he realizes the brokenness his departure caused. He no longer feels worthy to be called a son, so he prepares himself to live with the brokenness and to be considered a hired hand rather than a member of the family.

At this point in the parable, I imagine the scribes and Pharisees nodding their heads in approval. The younger son defiled himself. He is unclean after touching all those pigs. Of course, he mustn’t be welcomed home. But Jesus isn’t finished telling the story yet.

The younger son travels back to his father’s house, prepared for the sad reality that it will never be home again. But when he is still a vaguely human shape on the twilit horizon, his father sees him and runs out to meet him and embraces him and kisses him. The young man begins his prepared speech: “I am no longer worthy to be called your son.” But his father will not tolerate the separation, the brokenness any longer. “This son of mine,” he says, “was dead and is alive again; he was lost and is found.” This son of mine. With these words, the father repairs the broken relationship, and the two are reconciled.

At this point in the parable, I imagine the scribes and Pharisees raising incredulous eyebrows. Now the father is unclean, as well, because he touched the younger son before he purified himself with the appropriate rituals. What kind of family is this? But Jesus isn’t finished telling the story yet.

When the elder brother hears the revelry coming from the house, he learns of his brother’s return, and he will not enter the house or join the party. The elder son echoes his brother’s sin by separating himself from the celebration. When the father comes out to plead with him, the elder son shows his own division from the family. He calls his brother “this son of yours,” thus ignoring the fraternal relationship. And rather than working like a son, he says, “For all these years I have been working like a slave for you.” Like a slave. Like the hired hand the younger son was prepared to be.

But the father continues to repair the brokenness in his family. “Son,” he calls his eldest. There is no division between us because “you are always with me, and all that is mine is yours.” Then the father attempts to heal the fraternal separation by emphasizing the sons’ relationship to one another: “This brother of yours was…lost and has been found.”

I imagine the scribes and Pharisees noticing that they themselves look an awful lot like the elder brother. I bet their own irritation with Jesus deafens them to the reconciling nature of the father in the parable. But while the parable ends, Jesus still isn’t finished telling the story yet.

Both sons separate themselves from the family, but their father goes out and meets both sons in their brokenness. He runs up to the younger when his son is still far off. He leaves the party to be with the elder. Jesus continues his ministry by mirroring the action of the father in the parable. He doesn’t just wait for people to come to him. He seeks people out where they are, eating with tax collectors and sinners, healing the sick, touching the unclean, standing with the marginalized, dying with the criminals in the refuse dump on the outskirts of the city.

That’s our savior, the one who will never let any barrier or rift or division – not even death – separate us from his love. Our savior leaves the 99 sheep to search for the one that is lost. Our savior seeks out and finds the man born blind after he’s thrown out of the synagogue. Our savior reconciles Peter to him after Peter’s triple denial of ever knowing him. Our savior left his home in order to bring us to it. And we are his ambassadors.

It may seem like a fool’s errand, participating in God’s mission of reconciliation when the brokenness of the world is so great. It may seem insurmountable. But remember, Jesus isn’t finished telling the story yet.

*There’s a stealthy nod to The West Wing in this sermon. First person to figure it out gets five points.
Art: Detail from “The Return of the Prodigal Son” by Rembrandt.

One thought on “Healing Brokenness”