Imagine with me the Apostle Peter, who is imprisoned in Rome near the end of his life, talking to his cellmate about the day when Jesus spoke about his coming again. 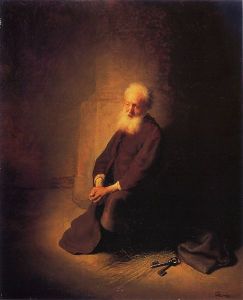 We were used to hearing Jesus say strange things. He would get this faraway look in his eyes, like he was seeing another place and time, or perhaps every other place and time. When we noticed him go distant like that, the twelve of us would gather around close because we knew he would have something to say when he came back to us a moment later. More often than not, the faraway look meant something strange and sometimes unsettling was about to come from his lips. But, as I said, we were used to Jesus saying strange things, having traveled with him for months or years. In fact, I suspect that a few of us – Bartholomew especially – followed Jesus precisely because of those strange things he said.

But this one time was different. I think Bartholomew was just trying to bait Jesus into saying something memorable when he pointed out the architecture around us and said: “Teacher, look! What awesome stones and buildings!”

I don’t think Jesus was in a mood to banter with Bartholomew because his response was short and clipped: “Do you see these enormous buildings? Not even one stone will be left upon another. All will be demolished.”

I remember seeing the smile drain off of Bartholomew’s face. The conversation ended as quickly as it had begun. But Jesus’ words had unsettled me. I knew that the temple had been demolished in the past by invaders, but if the Romans had wanted to destroy such a grand building, wouldn’t they have done so already?

Later that day, we were sitting on the Mount of Olives, and James, John, Andrew, and I went to Jesus privately to ask about what he had said. The temple rose out of the city across from us, and Jesus gazed at those old stones for several minutes. But he had that faraway look in his eyes, so we knew he was seeing something other than Jerusalem’s skyline.

We waited patiently, and finally he came back to us. He spoke in low tones for a time, as if the sky and the trees around us weren’t prepared for what he had to say. He spoke of wars and earthquakes and famines. He spoke of deceivers and false prophets. He spoke of stars falling from the sky and the sun going dark. I had hoped for something comforting after his clipped response to Bartholomew, but what Jesus had to say troubled me even more.

Seeing the distressed look on my face, Jesus squeezed my shoulder and said, “But after this they will see the Son of Man coming in clouds with great power and glory.”

He meant the words to be reassuring, but my mind was still filled with images of famine and falling stars. All I could think to say was, “When will this happen, Lord?”

Jesus shook his head and shrugged. “I don’t know,” he said. “No one does but the Father. That’s why you need to keep alert. Think what happens at a house when the master goes off leaving the slaves in charge. They don’t know when the master will return – in the evening or at midnight or when the rooster crows or at dawn – so they stay awake.” Jesus fixed his eyes on each of us in turn and said: “The same goes for you: keep awake.”

A week later I failed to do what he said. It was the most important week of Jesus’ life, of my life, and I failed to keep awake to the great power and glory of God being revealed in the world. Even during his trial and crucifixion, even during that pivotal moment, I could not keep awake and alert. Did Jesus know? When his eyes went faraway on the Mount of Olives, did he see me falling asleep in the garden at midnight? Did he hear the rooster crow when I abandoned him? Did he see me sobbing when I realized my betrayal?

After such total failure, I vowed from then on always to keep alert for the Lord’s coming. And over the years, I discovered three things. Very quickly, I discovered just how easily the distractions of this world can lull me to sleep. There is always something other than God clamoring for my attention, something immediate and important. And yet this something doesn’t necessarily lead me astray from following God. Rather, the things that clamor for my attention simply make me walk with my head down so I don’t see God’s glory all around me. The distractions win out much of the time because God doesn’t clamor. God whispers. God nudges. God invites. I don’t know about you, but keeping awake and alert is the only way I ever notice God’s subtle movement.

I also discovered that Christ still comes to me even now – again and again – but like God’s movement, subtly. Now, I know what you’re going to ask. Before you do, the answer is yes. I do believe Jesus when he said the Son of Man will come again in great power and glory. But I also know that I saw him in the face of the woman who brought us fresh clothes, and I see him in you. I know this sounds like a paradox – how can Jesus be present with us here in this rotten prison and still be coming again? I wish I could explain, but I’m no theologian. But Jesus taught me how the truth tastes, and this seeming contradiction tastes true.

Thirdly, I discovered that the best way to keep awake was to keep a light burning. Yes, I know they don’t allow us candles in this stinking cell, but that’s not what I mean. Many years ago, I wandered into a synagogue somewhere in Galilee and found the scroll of the book of psalms open on a table. I glanced down and read the first few lines of the eightieth psalm. And one of them has been with me ever since, rising unbidden from my consciousness whenever I begin to fall asleep. The verse reads: “Restore us, God! Make your face shine so that we can be saved!”

“Make your face shine!” God is the light that shines to keep me awake. Now, my friend, I don’t think you know the history of my people. Well, the psalm was written when Israel was in exile. That’s why they prayed, “Restore us, God!” But what they discovered in exile was that God was there with them even though they assumed God had stayed in Jerusalem. So they prayed: “Make your face shine” so they could see God more clearly when they were far from home. And I have taken up their prayer.

I am far from home. I have been distracted by many things clamoring for my attention. I don’t always notice Christ’s subtle presence in the people I meet. But when this prayer to God springs to my lips – “Make your face shine” – I become more alert. I notice Christ’s face shining in the faces of those I meet. I look up from all the immediate and important things and notice God’s glory shining all around me. I may be far from home. And the Son of Man may not come in great power in glory for years, even centuries. But I have tasted the truth that Christ’s face shines in the darkness of my life. I failed to keep awake during Jesus’ own dark days. But because his face is shining light on my path, I will not fall asleep again.