Eustace and Jill Pole are trying to escape a mob of bullies at the Experiment House, their ghastly boarding school. Jill has been crying, and the bullies can smell tears from hundreds of yards away. From their hiding spot, the two targets hear the angry shouts of the searchers. Eustace looks at Jill and wonders aloud if they might be able to escape to That Place. He begins calling out, “Aslan, Aslan, Aslan!” Jill follows his example: “Aslan, Aslan, Aslan!” The bullies draw near, and Eustace and Jill scramble through the laurels and up a steep slope. The weathered old door in the wall is always locked, but this time – miraculously – the knob turns. And the two children step into Aslan’s country.

Immediately after they arrive, Eustace falls off a cliff, but a lion arrives just in time and blows him to safety in Narnia. The lion – naturally – frightens Jill Pole. She tries to slip away, but the lion begins questioning her. Her showing off caused Eustace’s fall, she confesses. For that display of pride, the lion gives her a task to perform. “Please, what task, Sir?” asks Jill. “The task for which I called you and him here out of your own world,” says the lion. This response puzzles Jill. Nobody called them. They called out to – Somebody – a name she wouldn’t know. Wasn’t it she and Eustace who asked to come? 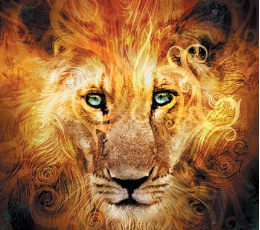 “You would not have called to me unless I had been calling to you,” says the lion.

The lion is Aslan, and the task on which he sends Jill and Eustace makes up the story of The Silver Chair, one of The Chronicles of Narnia by C.S. Lewis. This exchange between Aslan and Jill Pole from the beginning of the tale illustrates most vibrantly the foundational principle of a life of prayer. You would not have called to me unless I had been calling to you.

The Catechism* in the back of the Book of Common Prayer states: “Prayer is responding to God, by thoughts and by deeds, with or without words.” When I first read this definition, I was flabbergasted. I had never thought of prayer as anything more than asking God for stuff. God, please give me a kitty that doesn’t scratch me. God, please help us win our soccer game. God, please make Grammy not sick anymore. Now, please don’t misunderstand, I am not condemning this form of prayer. There are many kinds of prayer, and they all have fancy names like adoration, oblation, intercession, petition – you get the idea. Rather, the popular definition that prayer is “asking God for stuff,” is several bricks up from the foundation.

That foundation is, of course, God. More precisely, the foundation of prayer is God’s presence in our lives and call upon our hearts. “Prayer,” says the Catechism, “is responding to God.”** Think of prayer as a phone call. We never dial the number: we only have the option to answer the phone when it rings. When we choose to answer, we enter into the relationship that God yearns for us. Prayer is another word for our part in our relationships with God.

Of course, the phone call is not a perfect metaphor because God is always present in our lives and always calling upon us to serve God in the world. In this context, Paul’s directive to “pray without ceasing” seems less unrealistic. Our striving to respond to God’s perpetual call in our lives is prayer. The collection of our words and deeds that emanate from our relationships with God is prayer. Anything we do in response to God’s movement in our lives is prayer. While prayer comprehends the kneeling-beside-the-bed-at-bedtime image that many associate with prayer, the act of praying is so much more expansive.

Monastics down through the ages have understood this. Even the lowliest jobs at the monastery – peeling potatoes or weeding fields – were prayer. Monks prayed many times a day in their chapels, but the labor they performed in the meantime was prayer, too. While we don’t have strict priors delegating our labors, we can still import the monastic example into our lives.

Look at your day, your week, your year. How do your engagements and actions display your response to God’s movement in your life?  As a student, God calls you to learn about yourself and the rest of God’s creation. As a member of a family, God calls you to love and enjoy and forgive your parents and siblings. As a servant of God, God calls you to discover and enact that one way in which you can better the lives of those around you. When we respond to God in all these areas of our lives, we pray. We affirm our relationships with God. We live the abundant lives that Christ gives to us.

“You would not have called to me unless I had been calling to you,” says Aslan to Jill Pole. “We love because he first loved us,” says the writer of the First Letter of John. Likewise, we pray because God first called us – called us into the expansive, abundant relationship with God. What will our response be?

* Also called “An Outline of the Faith,” an Episcopal F.A.Q. Most people know it as the thing you read when the sermon is really boring.