The following post appeared Tuesday, November 2nd on Episcopalcafe.com, a website to which I am a monthly contributor. Check it out here or read it below.

When you listen to the Gospel, you might notice the trend that folks rarely answer questions directly. Instead, the responder either completely ignores the question or says something so profound that the question ceases to matter. Most things Jesus says in the Gospel fall into one of these two categories. Think about how often someone asks a question, and Jesus responds, “Well, let me tell you a story about that. Once there was a farmer…” Before Jesus enters the scene, however, John the Baptizer finds himself under interrogation, and he does just a good a job as Jesus in not answering questions with the expected answers. His unexpected responses to the folks interviewing him (as recorded in John 1) show John’s understanding of his identity, which helps us understand ours, as well.

The priests and Levites come to John and ask him a series of questions, the first being “Who are you?” This question seems to have an obvious answer: I’m John from over yonder, my parents are so-and-so. But that’s not what John says. Instead of saying who he is, he explicitly says who he is not. “I am not the Messiah.” And what’s more, he’s quite emphatic about it: “He confessed and did not deny it, but confessed…” By his answer, John seems to know what they are getting at, so he makes sure with his first response that any gossip about his messiah-ship is highly overrated.

So they try again: “What then? Are you Elijah?” He says, “I am not.” They try once more: “Are you the prophet?” “Nope.” John steadfastly refuses to play into any expectations these priests and Levites have about his identity.

I wonder to what degree our identities are based on the expectations of others? It’s not necessarily a bad thing for others to have expectations for us, of course. A community (family, church, team, circle of friends) plays a significant role in the development of our identities, and expectations are a natural part of that role. But if those expectations begin to suffocate us or make us begin to dislike the people we are becoming, then there is something wrong. 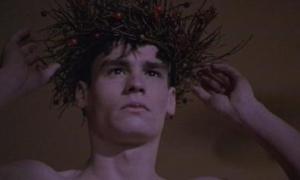 In the film Dead Poets Society, Neil Perry has a passion for acting. When he sees the flyer for auditions for A Midsummer Night’s Dream, he says, “For the first time in my life, I know what I want to do. And for the first time, I’m going to do it!” He throws himself into the role of Puck, and he’s good, he’s really good. But his father expects him to be a doctor and thinks this acting business is nothing more than a dangerous whim. Neil defies his father’s wishes and continues rehearsing for the play. After Mr. Perry discovers him at the theatre, he furiously tells Neil that he is not going to let Neil ruin his (Neil’s) life. Neil feels suffocated and trapped: he has found his calling as an actor, he has found himself. But Mr. Perry is stifling this identity with his expectations for Neil’s future. That night, Neil commits suicide.

Expectations like Mr. Perry’s can smother us. They can make us feel less worthy, less capable, less adequate because our worth and capability and adequacy fall outside the limits defined by those expectations. In their song “What a Good Boy,” the Barenaked Ladies lament:

When we feel smothered, stifled, or strangled by expectations, troubling questions form in our minds. What if I’m not a smart girl? What if I’m not a strong boy? What if I don’t measure up? Then another question compounds these: Will they still like/love/accept/welcome me? These expectations that help shape our identities now morph into ultimatums. They signal the possible breaking of a relationship: This is who I am, and if you don’t like it then fine. And the door slams shut. In this scenario, we begin to define our identities by focusing negatively on the rebellion against expectations rather than by stating positively who we are.

Expectations themselves are neutral things. They surely can be used to spur us to excellence or to inspire us to continue to grow and discover who we are. But they can also be used to deny our self-worth or sense of belonging. When John the Baptizer refuses to be defined by the expectations of the priests and Levites, he is holding onto the identity he has as the voice crying out in the wilderness.

The priests and Levites are unable to pin their expectation on John, but they can’t go back to their bosses empty-handed, so they press John asking: “What do you have to say about yourself?” The Baptizer answers with a quotation from the prophet Isaiah: “I am the voice of one crying out in the wilderness, ‘Make straight the way of the Lord.’ ” Even here, when they ask him deliberately about himself, he answers by pointing ahead of himself. Their concern is based on his seeming lack of authority to baptize, for he is not the Messiah or Elijah or the prophet. But such trifles don’t worry John. He states dismissively: “I baptize with water.” And then he points ahead of himself again: “Among you stands one whom you do not know, the one who is coming after me.” Everything John says about himself, he is really saying about Jesus. He only speaks in terms of Jesus; he deflects questions about himself, preferring to point to the one “who ranks ahead of me because he was before me.”

Rather than playing into their expectations, John flourishes in his identity as an arrow pointing to Jesus. To change the metaphor, he shines because he lives fully into his own particular, God-given identity. Like the moon, he has no light of his own, but he reflects the light of Jesus who is coming after him. Even as we struggle with the expectations of others and with discovering our own identities as God’s children, I can think of no greater joy than to be a moon to Jesus’ sun, reflecting the light of Christ.