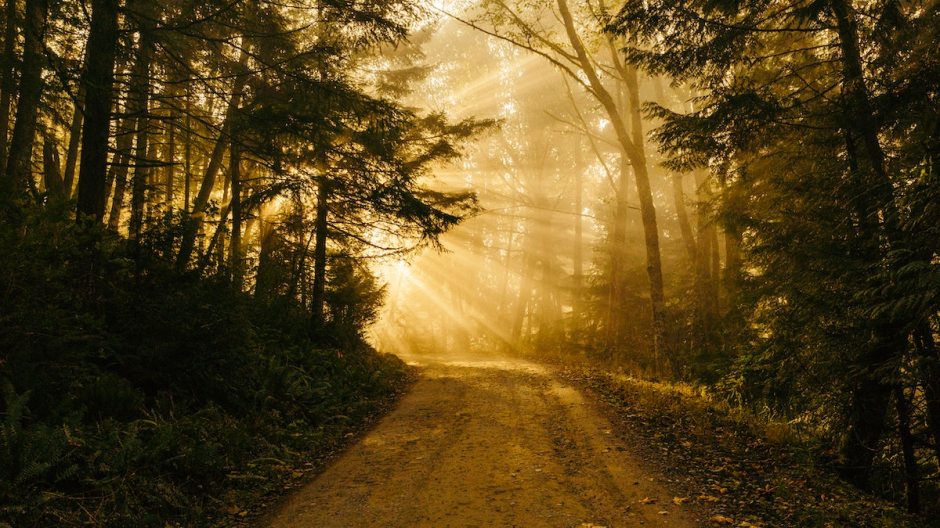 I’m not usually still in bed when the rest of my family wakes up. I often wake up some time between three and five in the morning, while everyone else gets up about 6:30. But this past Monday night, for some reason, I slept later than I normally do. I was still dreaming at quarter to six on Tuesday morning. Then, suddenly, the clock said 6:22. Leah and I were awake, waiting for the patter of little feet in footie-pajamas. Sure enough at 6:30 on the nose our five-and-a-half year old daughter came into our room and without preamble crawled into bed between us. The three of us cuddled for a while, in various configurations as dictated by our wiggly child. In one of the cuddling variations, a feeling of deep peace and soul joy came over me. For that particular moment in time, my body and my spirit were perfectly aligned to accept the love that God showers upon us through the gifts of each other. And the strange thing was that I noticed it while it was happening.

For me, this was a Road to Emmaus moment. We just heard the story. Two of Jesus’ followers are heading to Emmaus, about seven miles from Jerusalem, a few days after the horrible crucifixion of their teacher. On the road they meet a stranger, and they walk together, talking about the events of the past week. The stranger opens their minds to the scriptures that speak of these events, and the hearts of the two despondent followers start burning again with the fire of faith. But they don’t recognize the burning until later, until they are sitting at dinner with the stranger, after having invited him to dine with them. He breaks the bread, and they realize the Risen Christ has been in their midst all day long.

The timeline of this story has always fascinated me. The bereft followers of Jesus invite a stranger to eat with them. Once they are sharing the meal, they realize that they had been walking with Jesus the whole day. They look back at the journey and remember how they felt when he was speaking to them about the scriptures. “Were not our hearts burning within us while he was talking to us on the road.” They did not notice the burning in the moment. They felt it, but something pushed it out of their senses before the fire of rekindled faith could register.

It could have been their fear that kept them from recognizing the fire. At the same time these two are on the road, the remainder of Jesus’ inner circle are barricaded in the upper room for fear of the authorities. What did these two followers think when the stranger came up to them on the road? Could he be dangerous? An assassin sent to finish the job? Would the authorities be content with the leader or would they try to wipe out the whole group? And yet – into their fear, the Risen Christ steps and walks with them on the way.

It could have been their grief that kept them from recognizing the fire. When the stranger asks about what they had witnessed the week before, they say, “The things about Jesus of Nazareth, who was a prophet mighty in deed and word before God and all the people, and how our chief priests and leaders handed him over to be condemned to death and crucified him. But we had hoped that he was the one to redeem Israel.” There is so much grief in the past tense of that last sentence. “We had hoped…” And yet – into their grief, the Risen Christ steps and walks with them on the way.

Or it could have been their confusion that kept them from recognizing the fire. They knew Jesus had died and had been, at least, provisionally buried, and yet the women “astounded” them with the story of the empty tomb and a vision of angels. When folks went to confirm the story, the tomb was empty but Jesus wasn’t there – alive or dead. So these two followers do one of the best things you can do when confused: they take a walk. And into their confusion, the Risen Christ steps and walks with them on the way.

In Paul’s letters, a rich ambiguity exists in the original language because a particular tiny Greek word could mean either “of” or “in.” Paul often speaks of faith “in” Christ. Or is it the faith “of” Christ. It could be either, and Paul probably understand and even reveled in the ambiguity. The fire of our faith burns in our hearts, but the fuel for that fire belongs to Jesus. The faith of Christ enables our faith in Christ. When we are lost in fear, grief, and confusion, we may be unable to access our faith. We may look within and see a fire that has burnt itself out.

And yet, we are only a piece of the equation. We are the two followers walking the road to Emmaus. The stranger comes up to us and meets us on the road and offers us more fuel from a place where the fire of faith is never extinguished.

This past Tuesday morning, I had the rare opportunity of feeling my heart burning within me at the exact moment the Risen Christ was pouring new fuel on my fire. I wonder what the state of your heart is today? As you walk the road today, how are you able to recognize Jesus walking beside you in the midst of your fear, grief, and confusion? Your heart might contain a raging fire or nothing but smoldering embers. Either way, I pray today that you may sense the stranger beside you, who is the Risen Christ, stooping down to blow a breath of new life upon the fire of your faith.

Photo by Patrick Fore on Unsplash.