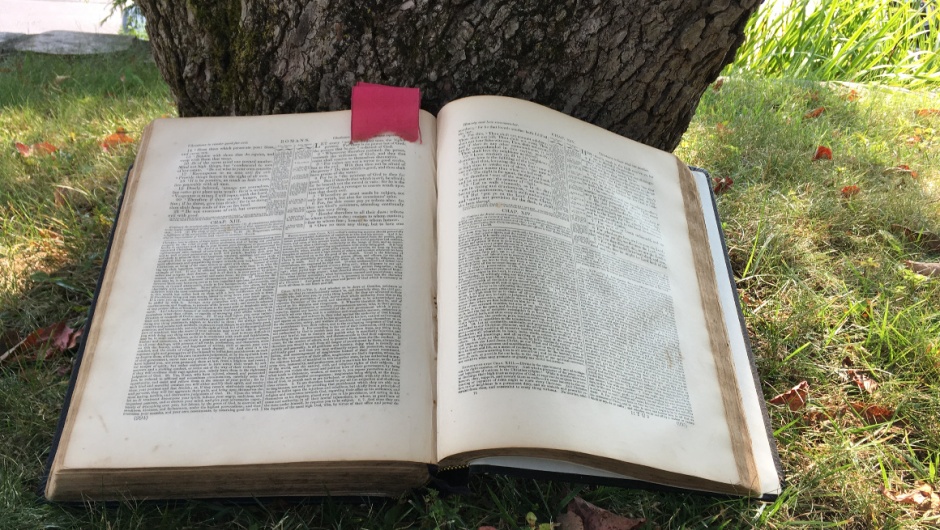 Last week, I talked about cultivating our spiritual awareness so we realize we are encountering God’s presence during the encounter and not after the fact. Moses was our shining example in that sermon, as he turned aside to really look at the burning bush. Jumping forward about 1,700 years, here’s the story of another person who participated in an encounter with God’s presence and whose life was forever changed.

His name is Saint Augustine, and I want to share his story with you today because he has had a potent impact on my own life, not to mention the Christian religion as a whole. Born in the year 354, Augustine hailed from what is now the northeast coast of Algeria, and by his own admission, he was not the poster child for godly living. He was a cradle Christian, but early on he abandoned the Church for a trendy religion called Manichaeism, much to his mother Monnica’s despair. During his formative years, he dabbled in hedonism and reveled in the bloodsport of the gladiatorial games. Augustine was also a master rhetorician, and he could win any argument he set his mind to, such was his debating prowess. His longsuffering mother, a saint herself, wept and prayed for her boy to turn his life around, but for many years Augustine lived it up, Vegas-style.

Monnica’s prayers were answered when Augustine met the Christian bishop of Milan, a man named Ambrose, whose own rhetorical skill matched Augustine’s own. They developed a deep friendship and Augustine regarded Ambrose as a father figure. He writes in his seminal work The Confessions, “I began to like [Ambrose], at first not at a first as a teacher of the truth, for I had absolutely no confidence in [the] Church, but as a human being who was kind to me” (V. xiii).

Did you catch that? One of the most influential figures in Christian history said he had “absolutely no confidence in [the] Church.” But in getting to know Ambrose – in that intimate connection with a person of deep faith and abiding love – Augustine began to reevaluate such a stance. It was the person and life of Ambrose, not his vaunted arguments in defense of Christianity that began steering Augustine in a new direction.

Such steering led to a fateful day in Augustine’s life at age 31. He was visiting a friend, who had a Bible on his table. Augustine was going through some great personal stress at the time, some swirling inner turmoil. When he reached the eye of the storm, he noticed the Bible lying there. He picked it up and walked to his friend’s walled garden. And there he heard a voice – a child’s perhaps – chanting in a singsong voice, “Pick up and read. Pick up and read.” Was it a child beyond the wall playing some game? Or was it the voice of God? Or was it both? In any case, Augustine, still in the throes of strain and strife, threw the Bible down against the base of a tree. It fell open.

It fell open to Paul’s Letter to the Romans and Augustine’s eyes found the same words we read a few minutes ago. “Let us then lay aside the works of darkness and put on the armor of light; let us live honorably as in the day, not in reveling and drunkenness, not in debauchery and licentiousness, not in quarreling and jealousy. Instead, put on the Lord Jesus Christ, and make no provision for the flesh, to gratify its desires.”

They were the exact words Augustine needed to hear. They spoke to the very core of his being. They spoke to his soul. He knew somewhere deep down that his hedonistic, morally shady existence offered him so much less than the fullness of life. And here was God speaking to him through the Apostle Paul: “Let it go. Let it all go. Put on Jesus Christ as you would a garment so that his life is the first thing people see when they look at you.”

This was the moment of encounter for Augustine. Ambrose had prepared him for it with friendship, tutelage, and love. His mother Monnica had prayed for it her whole life. And now Augustine was finally ready. He was present to God and realized God had always been present to him. Augustine became a priest, then a bishop, and went on to become one of the most influential thinkers and writers in Christian history.

About 1,700 years later, I was sitting in my dorm room during the second semester of my freshman year of college at Sewanee. I picked up the next book of the syllabus for my Humanities class, and I sighed. (We had a lot of reading – hundreds of pages a week.) The book was Augustine’s Confessions. I began it like any other college text: pen in hand, sticky notes, Dove chocolates nearby to reward myself for finishing chapters.

By the end of the first paragraph, however, something was stirring within me. I didn’t know what yet, but these words caught me just as Paul’s words had caught Augustine. “You have made us for yourself [Lord] and our heart is restless until it rests in you” (I.i). Like Augustine does in the Confessions, I began to look inward, to really look, to search my heart and mind. And what I found was an authentic faith in the God made known in Jesus Christ, a faith independent from what I  borrowed from my parents. Reading Saint Augustine – who at one point had “absolutely no confidence in the Church” – helped me find my faith, which had been buried under the rubble of a disastrous relationship with the Church.

Unlike most college texts, I devoured St. Augustine’s Confessions. I didn’t need the chocolate to keep me reading. I poured over the pages. I read every word, and while I only understood about half of them, I knew they were speaking truth to my soul like few things ever had. With Augustine’s help, I was having my own encounter with God, an encounter which would lead me towards discerning a call to the priesthood.

God is ever present, which is why encounters with God are so varied: from the burning bush to the Bible falling open against the base of a tree to the college textbook to any of the innumerable ways we can discover God in our midst. I invite you this fall at St. Mark’s to open your awareness to such encounter. What is God up to in your life and in the life of our community? In small ways, in large ways; in relationships new and old; in partnerships; in service; in witness; in the embrace of the grieving, in the sheltering of the homeless, in the feeding of the hungry, in the visiting of the sick and imprisoned; in the proclamation of God’s great and glorious love for all, no matter what piece of their identity has been trodden and maligned.

What is God up to here? Open your awareness to encounter with the holy in our midst and discover the truth that shatters our broken lives and puts us back together aright and anew. It happened to Moses and to Augustine and it’s still happening to me and to you. I’ll close with this from St. Augustine, in which he describes an encounter with the divine and reminds us of the ever-presence of our wondrous God.

“Late have I loved you, [Lord,] beauty so old and so new… You were with me, and I was not with you… You called and cried out loud and shattered my deafness. You were radiant and resplendent, you put to flight my blindness. You were fragrant, and I drew in my breath and now pant after you. I tasted you, and I feel but hunger and thirst for you. You touched me, and I am set on fire to attain the peace which is yours” (X.xxvii).