This June is the 5th anniversary of Wherethewind.com, and we are celebrating by looking back at some of the best of the last five years of this website. Today we have a post from the first couple months of the blog. I was at a county fair in West Virginia with a couple of friends and the following encounter happened. (Originally posted August 12, 2008) 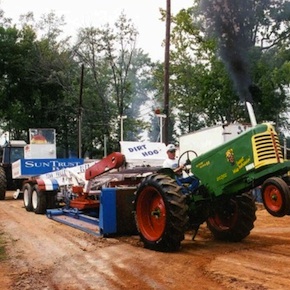 The smells of sweat and fried dough hung in the air, mixing with the burned oil of the tractor pull. He was sitting with hands clasped, wearing a plaid shirt with the sleeves rolled up and a challenge on his deeply lined, leathery face. She was standing, looking all the world like a Grant Wood painting, and thrusting matchbook-sized pamphlets into the hands of passersby. I walked by out of reach, but I couldn’t help looking at the booth, one of many at the county fair. “How sure are you of going to heaven? Are you 50% 75% 100% sure?” read the banner. My friend wondered aloud about how one arrives at a 75% surety of heaven. I chuckled, but I was unable to keep walking by the booth. On the table, a wooden contraption with three small doors read: “Do you know the three things God CANNOT do?”

I stopped. The Grant Wood painting saw my furrowed brow and handed me a pamphlet. It looked like a doll’s magazine. A smiley face decorated the cover along with the words: “Have you accepted Jesus Christ as your personal Lord and Savior?” I closed my hand around the pamphlet and pointed to the three doors. I tried to keep the incredulity out of my voice, but I failed miserably: “So, what are the three things God can’t do?” I said.

We talked for fifteen minutes. I told them I did not disagree with the first door, but that I preferred to state the sentiment in positive terms: “God always tell the truth” or “God is trustworthy and faithful.” I said that a “lie” is the absence of the “truth,” and that I’d rather talk about God’s goodness shown in God’s truthfulness than to try to hook people with the trappings of sensationalism. After five minutes, the man commented that I was very intelligent. I took that as a compliment, but I have a sneaking suspicion it was not meant as such.

As our conversation continued, I realized we weren’t conversing. We were sparring. I’ve never had a taste for theological pugilism, but I was already three rounds deep, so I kept jabbing and blocking. I’ve had this same conversation with county fair proselytizers, but never as an ordained person. After the man commented on my intelligence, he asked me what I did. I said, “I’m a priest.” Without another word, he thrust another pamphlet in my hand. It was about how Roman Catholics aren’t real Christians and are going to hell.The same thought kept jumping to the front of my mind: “People like these, no matter how pure and ardent their intentions, make my job harder.”

It didn’t matter that I wasn’t a Roman Catholic. It didn’t matter that I agreed with the man and woman several times during our bout. The only thing that mattered was that I didn’t buy into the way they framed the Christian faith–as a bottom-line venture whose only goal is to “save souls” by following the instructions in the smiley-face doll-sized magazine. Surely, there’s more than that. Surely, the abundance of what God has done and is doing is more important than a “what’s behind door number 3″ marketing scheme concerned with what God CANNOT do.

As I walked away, I wondered what had been accomplished during our boxing match. In the Gospel according to Matthew, Jesus says that when two or three are gathered in his name, he will be in the midst of them. Were we gathered “in his name” or in our own names, intent on KOing the other’s theological stance? Was Jesus there? Was I 50% 75% 100% sure of his presence? Looking back, Jesus was there, but he was not in my corner and he was not in their corner. He was there trying to get us to leave the ring.

One thought on “5 Years: The County Fair”