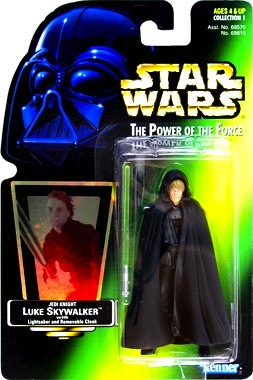 Last Tuesday, I received two rather large packages in the mail from my parents. Turns out they have been cleaning out closets in their house, and they decided for me that I would like to be in possession of all of the Star Wars memorabilia I collected when I was a kid. This includes about three-dozen action figures, none of which is old enough to really be worth anything and all of which are now taking up space in my closet, rather than my parents’. Many of them are still in their boxes (yeah, I was that kid), and I spent a while on Tuesday looking at them, trying to dredge up all the intricate details I used to know about the Star Wars universe. And I noticed on the back of every box an advertisement to purchase more action figure, which states: “The Force is with you in all the Star Wars figures and vehicles.”

Even if you don’t know much about Star Wars, I’m sure you’ve heard the most famous line of dialogue from the films. And if you’re an Episcopalian, I’m also sure that you have a kneejerk reaction to this line. Let’s try: “May the Force be with you.” (And also with you.) I like to think that George Lucas borrowed and tweaked that bit of dialogue from the Book of Common Prayer. We say something similar three times during an average Sunday service – at the beginning before the Collect (“The Lord be with you”), in the middle during the Peace (“The peace of the Lord be always with you”), and a few minutes later at the beginning of the Eucharistic Prayer (“The Lord be with you” again”).

Let’s focus on the middle one: “The peace of the Lord be always with you.” (And also with you.) George Lucas might have borrowed his dialogue from us, but we borrowed ours from Jesus. Three times in this morning’s Gospel reading, the Risen Christ says to his disciples: “Peace be with you.” (They aren’t Episcopalians, so they aren’t trained to say, “And also with you,” back to him.) On one level, Jesus saying, “Peace be with you,” is just a greeting to the disciples. And he has to repeat this greeting after showing them his maimed hands and side because they don’t recognize him the first time around. But as the words of the Gospel according to John so often do, even something as simple as a greeting is loaded with layers of meaning.

So what is this “peace” that Jesus offers to the disciples when he appears to them on the evening of the first day of the week, the day he rose from the dead? The surface level is the greeting still heard today in Hebrew and Arabic speaking countries. “Shalom” and “Salaam” – one wonders how there can be so much conflict between and among peoples in these countries – countries like Syria, Israel, Iran – when their special words for greeting one another means “peace.”

On the level below the surface, Jesus’ word of peace to the disciples acknowledges their current situation. There they are, huddled together in the house: shutters drawn, candles doused, door locked for fear of the people who colluded to put Jesus to death. Would the disciples be next? Would the chief priests and the council be satisfied with the blood of the leader or would they pursue the followers too? How had the disciples gotten everything so wrong? How could they have followed someone so disposable, so utterly breakable as Jesus turned out to be?

We might naturally conclude that the peace, which the Risen Christ offers to the disciples and to us, would excuse us from the pain and suffering that life sometimes brings. But Jesus never promised us a reprieve from tragedy. Rather, he promised something so much greater. He promised to be with us always to the end of the ages. He promised to suffer with us, to cry with us, to break his heart open when our hearts break and pour his heart’s love on our wounds. There is no door we can pass through, which the abiding presence of God has not already entered. There is no depth or height that we can attain and not be where God already is. As the psalmist says in one of the most beautiful passages in the book of Psalms:

Where can I go then from your Spirit?
where can I flee from your presence?
If I climb up to heaven, you are there;
if I make the grave my bed, you are there also.
If I take the wings of the morning
and dwell in the uttermost parts of the sea,
Even there your hand will lead me
and your right hand hold me fast.

But all too often we forget that God’s presence abides, and we fail to look for God in situations where we conclude that God couldn’t possibly be. And yet how many of us have said at one time or another, “I just need a moment’s peace.” By our definition, when we say that, what we are really saying is, “I just need a moment to remind myself that I am in God’s abiding presence, a moment to drink in God’s love, a moment to be folded into the arms of grace. This is what “peace” is.

And yet there is another level deeper still. When the Risen Christ offers peace to the disciples, the peace comes with a mission: “Peace be with you,” says Jesus. “As the Father has sent me, so I send you.” And then he breathes on them, saying, “Receive the Holy Spirit.” Thus, Jesus not only gives them the word of peace; he also breathes God’s abiding presence into them through the power of the Holy Spirit. The Father has sent Jesus to bring peace, and now Jesus commissions the disciples and us to do the same. The peace, which Jesus offers, is not for us alone, but for us to share with this damaged, broken world.

In about five minutes, we’ll have a chance to practice bringing this peace. I will say, “The peace of the Lord be always with you.” And you’ll respond: “And also with you.” Then we will greet one another with God’s peace. Just think how powerful an act this is. In these simple words – “Peace be with you” – we bring with us greetings from our Lord. We bring with us the joy that quells fear and uncertainty. And we bring with us the abiding presence of God and of the Risen Christ. Now just imagine: if we took this greeting we practice in church and carried the peace of the Lord into every handshake, every wave, every high five, every tilt of the head, every smile of recognition, every embrace, then we would change the world.

One thought on “Four Layers of Peace”