The following post appeared Wednesday, January 6th on Episcopalcafe.com, a website to which I am a monthly contributor. Check it out here or read it below. 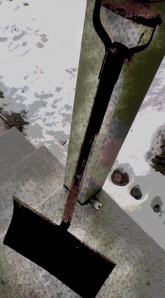 Here’s something you don’t know about me: I don’t own a snow shovel. This fact was unimportant until a few weeks ago when a record December snowfall dropped two feet of powder on Berkeley County, West Virginia. I woke up to a foot of snow outside, and the sky was dumping an inch an hour. I opened my front door, and the snow made an encroaching barrier to my front stoop. I went to the cupboard and pulled out my house broom. Sweeping the snow from the steps, I felt like Gandalf staring down the Balrog: “You shall not pass!”

But a broom is a poor substitute for a proper shovel, especially with the quantity of snow making islands of every vehicle on the street. And this is where the providence of God comes in. Providence is a tricky thing because one can easily over-define it to a point where we are simply chess pieces for God to move around the terrestrial board. To make matters trickier, one can also under-define Providence to a deistic level: God is merely an observer, having set events in motion with the winding of creation’s clock long ago. Neither of these definitions is satisfactory. Theologian Paul Tillich strikes a balance when he says, “Providence is a permanent activity of God. He is never a spectator; he always directs everything toward fulfilment. Yet God’s directing creativity always creates through the freedom of man and through the spontaneity and structural wholeness of all creatures.” *

So what’s all this have to do with my lack of a snow shovel? I’m glad you asked. Sometimes, encountering the Providence of God takes something quite small. We shall enter this small story during the early months of 2009, when a dear man from my congregation purchased a new car. He had been getting tired of his old Buick, and so he went for a shiny, silver Japanese sedan. But within a month of driving the car off the lot, he fell ill.

The cancer had been growing slowly, and for a time, the doctors held it at bay. The man spent several weeks in the hospital, until the medical staff, his family, and he decided that being comfortable in his own bed at home was as good for his condition as any drug. For several more weeks, he held on, making his wife laugh and cry, joking with the hospice nurses, slowly disintegrating from the inside. Not until his final day did the awareness, the flash in his eye, fade. He passed on in July, leaving his loving wife, a daughter, grandchildren, a cluttered house full of memories, and a brand new, silver, Japanese sedan.

Fast forward from midsummer to mid-autumn. A deer ran into my little Korean car, and the insurance company whisked it away to the total loss center to be evaluated. For some foolish reason, I didn’t have rental coverage as part of my plan. But I did have something even better: the man’s wife, who is the dear heart I’ve mentioned many times in blog entries over the last year. She found out that I was without a car, and asked (in her sweet, typical fashion) if I would help her out: “You see, his car’s been sitting in the garage since summer and if it doesn’t get driven, it will start to fall apart. I would be very pleased if you would drive it for me.”

I readily agreed to the arrangement, all the while smiling to myself because she made it sound like I was the one doing her a favor. After two weeks, my damaged car finally made it to the auto shop, the insurance company having decided it was worth repairing. I hoped to have it back by Thanksgiving, but the mechanic found more damage than the original estimate covered, which necessitated another visit from the adjuster. So when will it be done, I asked; by mid-December, the mechanic promised.

“Keep the car as long as you need to,” the dear heart said, when I told her the repairs were delayed. I suspect that if my car had been a total loss, she would have simply given me the shiny sedan because she’s just that generous a person. But I really like my car, so I was willing to wait out the repairs. I called the auto shop on December 17th hoping to hear that I could pick up the car that day. The collision was five weeks before, surely enough time to repair some front-end damage.

“Well, we took the car for a spin,” said the mechanic, “but it needs realigning so we put it on the lift and noticed something. Did you say your insurance company took the car to a total loss center first?” Yes, I said, not liking where this conversation was going. “Well,” the mechanic continued, “at those places, they use this kind of crane to lift the cars… We’d’ve never noticed it if we hadn’t put the car on the lift, but it looks like the crane cracked the fuel tank. So I need to get your adjuster out one more time to look at it.” Great, I thought. How long, I said. Another couple of weeks, what with the holiday and all, came the answer.

Two days later, the snow hit. With broom in hand, I stood on the front stoop and looked at the snow-covered Japanese sedan. The car had been driven a total of 317 miles before I took the wheel. I had put nearly two thousand miles on it during the last month. I thought about the dear man, a practical fellow, who bought the car last winter. I trudged out to the car, swept the snow from the trunk, and opened it. Inside was a shovel.